Our signature artist is veteran Chicago blues circuit guitarist/vocalist Toronzo Cannon. We are honored that Toronzo chose Function f(x) to design and produce a pedal that captured his ideal tone for studio and live use. This collaboration ultimately gave birth to The Cannon dual fuzz, and we are proud to have created this pedal in partnership with Toronzo.

Toronzo Cannon was born in Chicago in 1968.  As a young boy, Toronzo would stand outside the door of Theresa’s Lounge, one of the city’s most famous South Side blues clubs, and listen to the live blues music being made inside. Artists at Theresa’s included Toronzo favorites like Junior Wells and Buddy Guy. He also heard plenty of blues growing up in his grandfather’s home, and listened to soul, R&B and contemporary rock on the radio. Toronzo spent years paying his dues on the Chicago blues circuit, starting off as a side guitarist and eventually elevating himself to a respected band leader and well-loved blues artist. 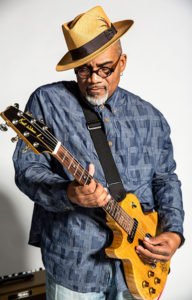 From 1996 through 2002, Toronzo played as a hired-gun guitarist for Tommy McCracken, Wayne Baker Brooks, L.V. Banks, and Joanna Connor.  In 2001, he formed his own band called The Cannonball Express. By 2003, he was working exclusively as a band leader. Over the next several years, Toronzo and his band released multiple albums, including 2007’s My Woman (self-released), 2011’s Leaving Mood (Delmark) and 2013’s Blues Music Award-nominated John The Conqueror Root (Delmark).

Toronzo has played the Chicago Blues Festival no less than 10 times, initially as a sideman, then as a special guest, a sidestage band leader, and finally as a main stage headliner.

When he’s not on tour, he drives a Chicago Transit Authority bus by day and performs by night. Using every vacation day and day off and working four ten-hour shifts a week, Cannon arranges his schedule to gig out of town as much as possible. Toronzo is the living definition of a working musician.

His current album, The Preacher, The Politician Or The Pimp, is available on various platforms for download or streaming. PBS Television’s Chicago Tonight sums it up like this: “Cannon is just your typical CTA bus driver who moonlights as a sought-after Chicago blues musician. As a guitarist, singer and songwriter, he drives the sound of Chicago blues from the city to blues clubs and festivals around the world.”