That lovely swirly filtery effect: Phaser! Used by a wide array of artists for the last 60+ years, the phaser pedal is still a bedrock tonal additive to the modern era of music. From rock legends like Jimi Hendrix, Led Zeppelin, Pink Floyd, Robin Trower, Genesis, Rush, David Bowie, Van Halen, Wilco, and Radiohead,  (to name just a few); jazz greats like Bill Evans; funk legends Parliament, Rufus, and Bootsy Collins; and up through more recent acts such as John Mayer and Gary Clark Jr.; the noble phaser has its fingerprints everywhere.

What is a Phaser? / What is phasing?

Without getting into the nitty-gritty technical details, a guitar phaser pedal (or a phaser effect plugin in a DAW recording setup) shifts the phase of your input signal and mixes it back in with your dry signal. A low-frequency oscillator (LFO) varies (or modulates) the amount of phase shift relative to the dry signal, which creates that classic filter-swoosh sound for which phasers are known and loved. Modulating the amount of phase shift acts as a sort of “moving” filter, similar to turning a tone control knob back and forth.

The phase shifting in a phaser pedal is done via a series of all-pass filters. Each filter is often called a “stage”.  Typically, phasers are configured in even numbers of stages (2, 4, 6, etc), but odd numbers of stages are also present in some pedals. A good example of this is our very own Parallax Tremolo + Phaser, which has 5 phase shift stages.

A single filter stage by itself usually does not produce enough phase shift to get a truly phasery sound, so the minimum for a useful effect is 2 stages (such as MXR Phase 45). Each 2 stages of phase shift produce one distinct “notch” filter.

The most basic phaser pedals, such as the MXR Phase 45 and Phase 90, have only one control: Speed. This controls the speed of the LFO. This control may also be named “Rate” or “Frequency”. 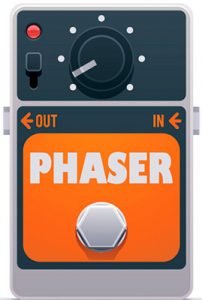 Most phasers also have a Depth control, which adjusts the amount of influence the LFO has on the phase shifting. It may also be called “Intensity” or “Sensitivity” or something similar.

Feedback is another handy control found on many guitar phaser pedals. This may be a knob or a switch and it adjusts how much of the wet phased signal is fed back to the input of the phaser. Used in conjunction with the Depth control, Feedback is used to fine tune the character and intensity of the phasing effect.

You may also see some other controls on phaser pedals beyond the classic three mentioned above. Here are a few that are most common:

JFET vs Optical vs OTA (and others) Phaser Pedal

There are several ways to produce phase shift in a phaser pedal, but what they all have in common is that they need some kind of variable filter element to function. So let’s break down the most common methods and also have a look at some not-so-common approaches.

As an introduction to the terminology, JFET stands for Junction Field Effect Transistor. It is a type of transistor that behaves similarly to a vacuum tube triode in that it is a voltage-controlled device. In its use in a phaser, a JFET is configured as a variable resistor that is directly acted upon by the LFO. JFETs are notoriously inconsistent from device to device, so they must be individually tested so that certain operational characteristics can be matched in order to get a working phaser. Links to read more deeply on the topic of JFETs as variable resistors are linked below in the For Further Reading section.

At the heart of any optical phaser is a set of LDRs (light-dependent resistors). This is the variable resistor element acted upon by the LFO. The LDRs change resistance as the amount of light shining on them changes. The light source is typically an LED but could also be a small lamp bulb. The LFO varies the amount of light being emitted by the LED (or bulb) which in turn changes the resistance of the LDRs.

There is a lot of variability in LDRs in that they react differently to various wavelengths of light, and they also tend to react asymmetrically to the rise and fall of light levels. In other words, LDRs react more quickly to an increase (rise) in light levels than it does to a decrease (fall), or vice versa. The result is that the rise/fall of the filter effect you can hear can be described as “throby”. The characteristic rise/fall of the Univibe pedal is a great example. So no matter how perfect of a sine wave the LFO is producing, the LDRs will react in a sawtooth waveform: 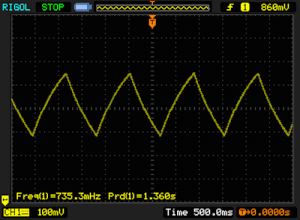 OTA is short for “operational transconductance amplifier”, which is somewhat similar to a more conventional op amp you would find in most guitar pedals. An OTA can be used to make an all-pass filter stage that can be directly modulated by the LFO with no need for an external variable resistor (such as a JFET or LDR). How this works is well beyond the scope of this tutorial, but there are links below for further reading. 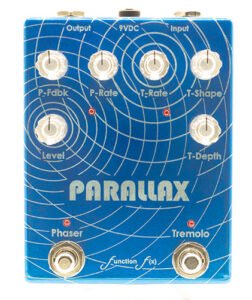 Similar to the OTA, a VCA (voltage-controlled amplifier) can be used to make all-pass filters that are modulated directly by an LFO. This is a far less common method of phase shifting in the pedal world, but not at all uncommon for modular synth effects.

In this setup, a series of logic inverter gates are pressed into service as variable resistors to be acted upon by the LFO. The logic gates are made from a complementary pair of MOSFETs (metal oxide semiconductor field effect transistor) that behave similarly to JFETs in terms of variable resistance. The all-pass filter stages are made with standard operational amplifiers. The upsides are that you don’t have to match JFETs or MOSFETs and the response is very linear/symmetric (unlike LDRs). The downsides are that the circuit as a whole tends to be more complex with more on-board components and the current draw will be higher than most of the other methodologies.

The only commercial example we are aware of is the later version of the Electro-Harmonix Bad Stone.

A varistor is a standalone passive component that varies resistance based on voltage applied to it. There probably aren’t any pedals that use this method, but there were some amplifiers (Magnatone) in the past that did. Check out the GeoFex article linked below for additional reading.

This one is really rare. A saturable reactor is a special kind of inductor that varies inductance based on how much the core is saturated. This is very outdated technology and you likely will never come across a phaser pedal based on it. There was an old Hammond tube-based unit called AO-47 that used saturable reactors.

Which type of phaser pedal sounds best? You’ll have to be the judge of that yourself. With a few exceptions, the biggest factors in how any given phaser sounds relate to the center frequencies of the variable filter effect, how many phase shift stages there are, how the feedback path is set up, and the waveshape and sweep range of the LFO. How the phase shift is accomplished is far less of an impact. The primary exception being optical phasers, as most of them will have a characteristic sawtooth waveshape based on the asymmetric rise/fall of the LDRs.

The Technology of Phase Shifters and Flangers, R.G Keen / GeoFex. If you only read one of these links, this is the one.

JFET as a Variable Resistor, The Offset Volt.

What is a Light Dependent Resistor and Its Applications, Wat Electronics.