The Function f(x) Family of Artists

San Diego-based solo artist Matthew Phillips has years of national and international touring under his belt, as well as two original songs featured in major motion pictures. His debut studio album is currently in production, but truth be told, Matthew is at his absolute best during the live shows he performs. With hundreds of thousands of followers around the globe, Matthew says his goal in making music is to give hope to the hopeless and show love to those who are broken.

“What caught my attention first was the visual appeal of The Third Rail dual overdrive. I bought one based entirely on aesthetcs, but as it turns out, the pedal somehow actually manages to sound better than it looks. I use it as my core overdrive tone, and often as both rhythm and lead tones in the same song. Working with the guys at Function f(x) has been absolutely incredible, and I know they’ve got my back.” 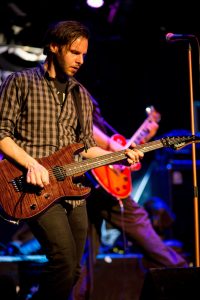 “I discovered Function f(x) and the Clusterfuzz when I was reorganizing my live rig. I was seeking a versatile fuzz that could go from a warm 1960s vibe to a crazy bitcrush-esque noisefest that didn’t become unusable with a buffered/wireless signal. I found a demo video on YouTube and I was so impressed that I purchased the Clusterfuzz before the video had even finished. When the pedal arrived, I knew I had made the right purchase decision. Over a year later, the Clusterfuzz remains in place on my board and it’s one of my favorite tones that I have at my feet.”